As it was rightly pointed out to me by Facebook, WordPress, and a number of people, I’ve been a bit slack having not made a post in 6 weeks and 2 events. There has been a lot of goings ons, so rather than making one giant post I’m going to break it down to a twofer race recap of the Totara Park and Waharau events, and one of the non event developments. As it’s fresh in my mind, and legs, I’ll kick off with the events.

In the Xterra series you can’t get two events that are less alike than Totara Park and Waharau. Totara Park is an urban park in South Auckland, primarily used for walking dogs and (sedate) mountain biking; and is one of the most attended with nearly 1000 people this year. Waharau on the other hand is rugged native bush, wild hiking with big climbs – it’s the trail runners trail running event.

First up Totara, fast, flowing, and family friendly. Once again my wife, George, took part in the short event, even though it meant getting out of a warm bed for the 2 degs at the start line. The super long the course would take in two outer loops of the park, and for the short a single inner loop.

Prior to the race I was able to catch up with a tired and flustered Vicki Woolley, who soon told us the reason for her state. Overnight some little so and so’s had vandalized the courses, not just pulling out signs but moving them around redirecting runners in the wrong directions in a concerted effort to be a giant throbbing … rooster. But at 3am (I think she said) the Total Sport team discovered this and reinstated the markings, so at 9am none of us runners were any the wiser.

Other than getting caught near the front of the pack before the race start, due to chatting with Tony Firth, the first loop went by relatively uneventfully. Well mostly, without wanting to be too crass, 5km in there where rumblings of discontent from dinner the night before. Luckily (I thought) there is a Port-a-loo by one of the aid stations. Well as it turns out it’s less of a Port-a-loo and more a portal to hell, so hoping to run it off, I carried on. But there must have been some pain in my face as Allen (from Photos4sale) asked if I was ok as I past him.

Me looking not so easy

The goal for most SL’ers is to get the first loop done and out on the second between the mid and short starts. I missed this window, joining the short runners near the head of the pack. As they passed me, I kept waiting for George to shoot past. As luck would have it she caught me right before one of the photographers, meaning we where able to grab a lovely couples photo. We parted ways soon after where our courses split.

Pasting the Portal-loo again I contemplated it, but decided the remaining 5km in discomfit was better than the inevitable plague that lurked within. With some quick maths I figured that if I could hold my pace, I might be able to get under the 3hr mark for the 21km. Rejoining the shared trail for the last few k’s, I took a boost from being able to overtake some of the tail end runners (small victories).

With a short up hill to the finish it was all over, bar a quick dash past my mates to take care of a pressing problem. I’d finished in 2:57:03, but 800m short of getting the much desired July 1/2 Marathon Strava Badge (this stung as I was also 200m short at Waiuku 3 weeks earlier). Totara Park was Totara Park, some love it, some hate it. For me it’s a pretty quick outing that I can enjoy with George (albeit for a short section).

George over the line 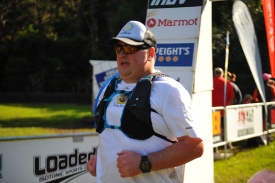 Only really got one thing on my mind at this point

The side of Tony, who just finished his first super long.

Now Waharau is completely the opposite, while Totara ranks a 5/10 difficulty, Waharau is a 9.5/10. It’s the most remote of the events meaning it’s a full day out and only one of two requiring us to carry compulsory gear. Despite being the hardest I was really looking forward to bagging the highest mountain in Auckland (?) (Mt Kohukohunui), I had even supplemented my (and Tim and Ben’s) compulsory gear with a beer to crack at the trig at the top. 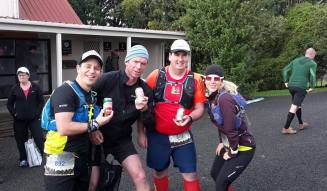 Additional required gear for the day. 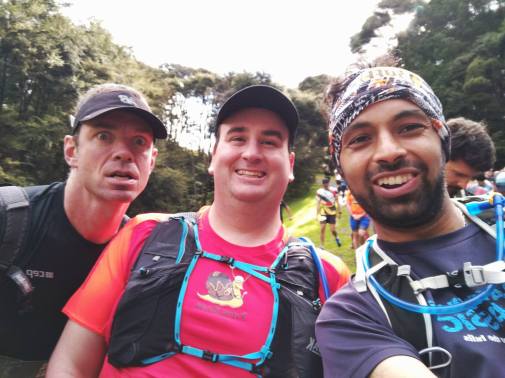 Before I could enjoy my beer, I’d need to climb to the first aid station 4km in and 460m up in under 70min to make the cut off. Last year I made this in about an hour, so while nervous I was confident that I should make it in time. Making the aid station in 50min I was stoked and ready to turn left, until Vicki pointed me to the right, and on down the hill loop. In a moment of confusion I double checked my watch, was it 70min, had I screwed up? I asked if I’d missed the cut off, no, I was under the time. However the rain/wind/low cloud meant, that if needed, the rescue helicopter in Total Sports evac plan wouldn’t be able to fly.

With peoples safety on the line, I’m certain what was a hard call had to be made and so it would come to pass; everyone would be slogging out the dreaded double loop of the long course. So with no trig on offer and a beer in hand, I too made a call and opened it at what was now the highest point of the course. To motivate me to make the climb back up again, I downed half and left the rest to return to.

Better have a beer to drown Vicki’s bad news. It was sufficiently damp at the top. 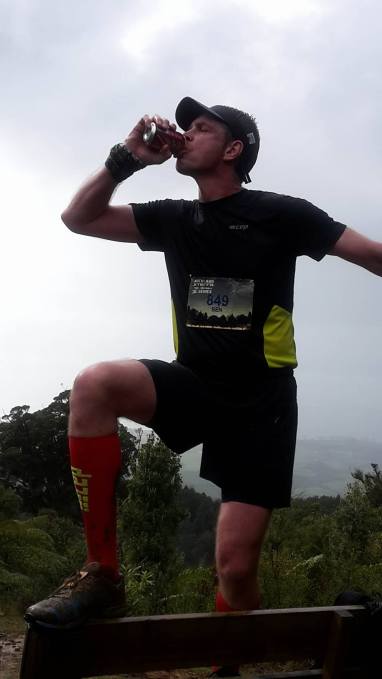 Ben toasting the view, and even some sun. 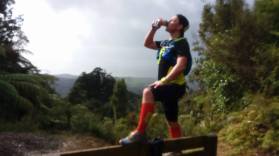 Tim also taking in the view.

My weapon of choice for the day. The Spirit5

By this point I’d made myself a new friend, Luke who calls the Hunua Ranges his local. Settling into a comfortable downhill pace we worked our way back down. Striding down the clay and gravel, I was amazed by my new Icebug Spirit‘s with their combo of aggressive lugs, Icebug’s signature stick rubber, and 14 tungsten carbide spikes per foot. I never felt like I was going to slip, especially on anything wooden. Not having to worry about bailing we chatted away till it was time to climb back up again. On the first lap I made a point to run anything that was flat or down hill. Second time around this skill left me, I couldn’t even fake run/smile for the camera.

Finally the climb was over and I was back at my waiting beer. To the surprise of others in our pain train, who wondered why and how I had a beer there waiting. Beer done, wee chat with Vicki and Luke about the current state of the Hunua trails (not too good unfortunately), it was time to smash it back down the hill again and home. To continue the theme of the series I came up short of the 21km promised and 1min over 3hrs, but once again with a smile and story.

Me and new mate Luke hitting the water hazard first time around.

Racing in the stream 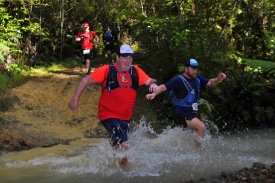 Karate kidding it into the stream for the second time. 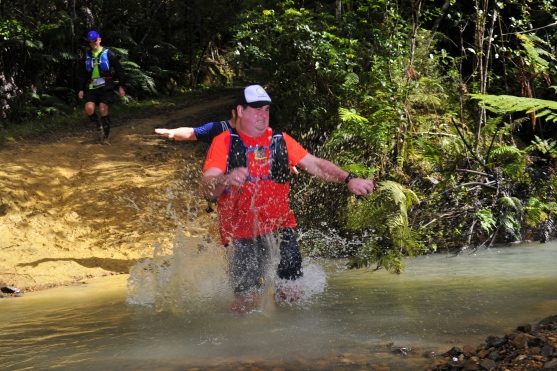 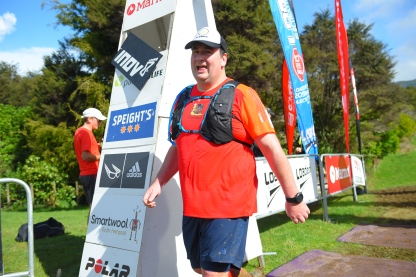 Happy to be done.

Everyone in sync, even Ben and Tim

As is standard for our Waharau adventures, it was off to Miranda Hot Springs afterwards to soak the aches and pains, and to rehydrate a little. I would recommend this detour to all after the event. But as all things must come to an end it was time to head home. The mountain and trig will be there next year, and thanks to Total Sport’s call, so will everybody else to have a crack at it.

Stay tuned for all the other crazy that’s going on.