Kid free long weekend to Rotorua for Xterra here we come!This was a trip we’d been counting down to for months. On Friday George and I piled into the car with the Browns (Dale and his wife Olea) and set off to Rotorua. The original plan had us almost collecting the set of events, with George walking the 5.5km, me in the 11km, Olea in the 21km and Dale taking on the long triathlon. However two weeks out Dale gave himself a calf tear that didn’t clear up in time, and with his eyes on the T42 in less than a month he had to withdraw and become the team supporter.

This was going to be the first real test of my training with Chris Mckeown from Runstrong over the past few months. Chris had me focusing on running lighter and less plodding, a higher cadence and not leaning forward

from the waist. We’d also been working on mobility and flexibility. It’s always hard to gauge how things are going in the vacuum that is training. So with Icebug putting on a social yog at Okura Bush the week before it was a pretty good chance to see how I was going. After a pretty good run setting a personal best on the 8km cottage return I was looking forward to the Xterra race.

After fighting hard to resist all that was on offer at the breakfast buffet it was time to head off to the start, albeit a little later than planned, (I got my vengeance on the buffet the following day). Combined with traffic into the venue we arrived with just minutes to the start, so there was just time for some quick stretching on the line and we were off. I left George to walking with Dale and set out on my merry way.

Once again I felt carried away with the crowd and set out what my watch said was too fast, but this time it felt like it was the right speed. Before I knew it I was at the first aid station at 2.5km and feeling good. I pushed on focusing on the points that Chris had set for me. I completed my first lap in 46 minutes and more surprisingly for me, I’d run the whole way. In the Xterra series last year I had always ended up walking some of the 5 or so kilometres.

Pausing to return a shoe full of stones to the beach, I was off onto my second lap and before I knew it the shore line gave way to the aid station now at 8km. Holy crap, I was still feeling pretty good and apart from walking a set of stairs, I was still running! Going into the race my goal had been to run as much as I could, now it seemed possible that I was going to run whole way. And with that I finished the 11km in 1 hr 37 min, tired but pretty damn happy with myself. 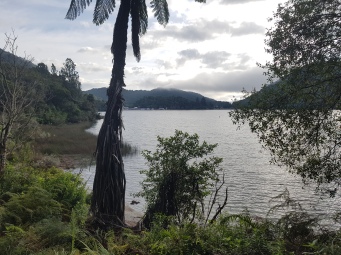 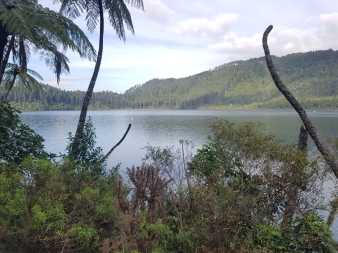 The nice bonus about Rotorua is there are plenty of places to have a hot soak to ease the aches and pains, and that was exactly where we were heading after making full use of the breakfast buffet the following day.

All in all it was a great weekend away; Olea set a PB on the half marathon, and George has discovered the trails. Whether this will be a good thing will be seen in time, it might backfire when we both want to do a race but someone will need to mind the girls.

Next up is the inaugural Waitomo race and another 11km.

I was a bit hesitant to get coaching to start with, as my running is a hobby and I’m not out to win the events. But I have quickly come to realize that there is a lot to be gained by just improving my running technique and working on my strength and movement. I’d recommended contacting Chris at runstrong@gmail.com and have a chat.

One thought on “Xterra Rotovegas”